Today we started little later at 8 am. First we headed out to Jingshan Park which is right in the end of Forbiden City (opposite to Tianamen square). There were a lot of people doing their morning exercises. What we really went there for were the views you get when you climbed to the top of the hill in the park. They build Pagoda on top of this already high hill. You could see whole Beijing from there if there would be no smog. And smog it is. We have not seen a sun yet, just a glow. 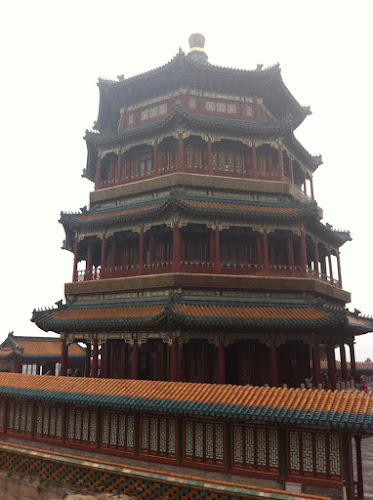 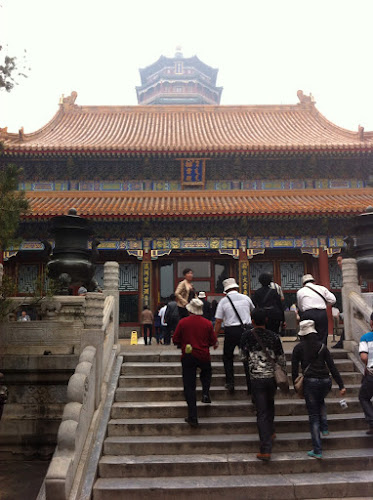 After busy morning we headed to Hutongs to eat late lunch. We ordered the Peaking Duck and it was very good. It cost us about $60 for 5 adults and 1 child. This included desert to bring home and biers for the guys.

Once done with the feast we went to walk the food of in the Hutongs. Those are little houses, with tiny streets which per my understanding were build for the solders. Now there is a lots of shops, bars and restaurants, but you can still look at alleys showing some residential houses. Really authentic, but I would not like to live there if you pay me. They seemed tiny and the smell..... By the way I am already tired of Squatty Potties, I met some pretty nasty one today. And I will have to deal with them for 2 more weeks. 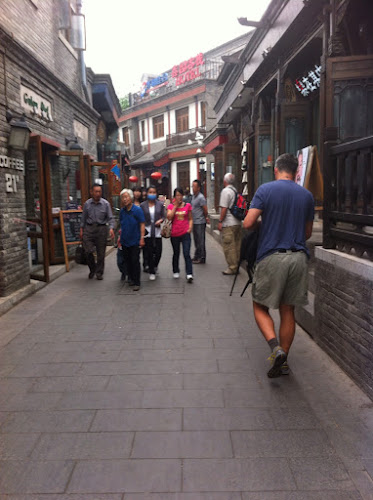 On the way back to hotel we stopped by the Lama Temple thinking it will be quick. Not so much. It seems a lot of these buildings (compounds) like Forbidden City, Summer Palace and others just keep going. One building after another one with courtyards between them and all hiding behind wall. Inside of this temple were probably 20-30 mini Temples (bigger buildings) with 1-3 Buddha's in them. In the last building was the tallest Buddha which was carved out of one big tree. There was also sign that the Buddha is listed in Guinness book.

I will try to add more pictures later. My camera died and I used Brent's IPhone, but for some reason I can not get the pictures emailed or synced with ICloud.